The Miracle of Honeycomb

Raw edible honeycomb is one of nature’s most delectable marvels made by honeybees. It’s full of beauty and punctuated with a taste of bliss. The miracle of honeycomb shows the functional importance and culinary benefits of this important hive component.

Honeycomb is a perfect structure of hexagonal cells built from natural beeswax (cera alba) which is made by the female worker bee.

The comb foundation in a commercial beehive is the building block to the hive. Created by beekeepers, it provides honeybees with a foundational base of beeswax to build out. 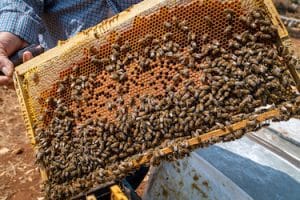 Beekeepers do this by reusing beeswax after:

1) A hive was harvested and the comb is uncapped

2) The honey was spun out with a honey extractor and

When a hive swarms, they typically startup a new beehive with new honeycomb foundations (from scratch). They often do this in a tree or potentially inconvenient places, like a home.

Can you eat honeycomb? Yes! Raw honeycombs are delicious and very edible. They are also exceptionally nutritious because raw honey is full of vitamins, enzymes, antioxidants, and bee pollen. The entire honeycomb can be eaten including the natural honey and waxy cells surrounding it. Unfiltered and unpasteurized raw honey has a more textured consistency than filtered honey because no straining takes place. Honeycomb paired on a charcuterie board is a little-know secret that makes it twice as effective. To get some great charcuterie ideas, try checking out some ideas here by Food and Wine Magazine. 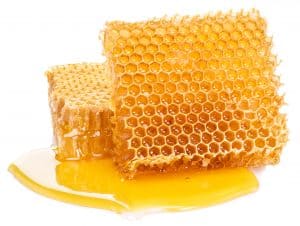 The beeswax, conversely, has little nutritional value other than small amounts of vitamin A. Because beeswax provides a phenomenal source of roughage, it serves as an excellent digestive aid. With beeswax, the soft waxy cells can be chewed as gum and it’s very good for your teeth!

When chewing the beeswax, healthy, active biological compounds enter your body. While beeswax helps clean your teeth and gums, it also removes plaque and disinfects your mouth. During Colonial times, the first chewing gum was made from beeswax mixed with tree resins.

The honeycomb taste first depends on where the honey bees have buzzed. This determines what they pollinate and bring back to the hive and store in the comb. It will be crunchy and typically tastes sweeter than straight raw honey from the same hives. This is mostly due to the purity of honey straight from the capped comb. Once honey is extracted from comb, honey’s hydrogenous nature ends up absorbing moisture from the air and increasing the honey’s moisture level. The honey from the comb, however, is a capped comb where the honey is consistently a lower moisture level. The lower moisture creates a more intense flavor when eaten straight from the honeycomb. Built by Bees honeycombs are a bright mix of honey flavors collected from specific areas where gallberry, tupelo and wildflowers are indigenous.

Most westerners prefer the lighter or virgin comb based on its texture, lighter taste, familiarity and availability. Honeycomb colors are primarily based on the honeys color originating from the nectar’s floral source. Darker honeycomb honeys, however, are sometimes darker because they are post-brood cells. No, you are not eating brood, it’s just honey from a post-brood cell. Darker honeycomb is often stoked with bee pollen with extra enzymes and nutrients.

Honeycomb is a Super Food

Honeycomb is rich in carbohydrates and antioxidants, Since raw honey is the main edible, it offers rich vitamins, minerals and protein. Raw unprocessed honey contains enzymes, which give honey antibacterial properties. These properties are fully preserved when honey is stored at ambient (room) temperatures.

Honey creation is a process which starts when bees pollinate flowers. The story behind the miracle of honeycomb is not complete without the tireless female worker honeybees. They collect pollen and nectar from floral sources for the entire hive. The nectar is stored in their stomachs and passed to other worker bees. This process reduces the water and transforms the nectar into honey. This honey, in turn, is stored in the honeycomb by the worker bees.

Beehives consist of separate partitions of honeycomb cells. Partitions consist of: honey, pollen, brood, queen and drones.The honey and adjoining pollen cells represent the food stockpile for the entire hive. The queen and the drones live in smaller, yet higher rent districts. The honeycomb brood cells are where the queen bee then lays her eggs and represent the hive’s future. Thus, these cells function as incubators for the maturing honeybees. Scrupulously maintained by the worker bees, these cells also contain two main honeycomb components: beeswax and raw honey. The honeybees also use this honeycomb to store honey for their winter food and hold the larvae.

The hexagonal shape is an engineering masterpiece due to its superior strength, durability, simplicity and storage capacity. From a bee’s perspective, the hexagon is the most spacious container compared to all other shapes.

Why though, did the bees choose a hexagon? Because bees can’t talk, the answer remains conjectural. Over 2000 years ago, however, a prolific Roman scholar, Marcus Terentius Varro, wrote about the hexagon honeycomb in his agriculture book.

One premise for Varro’s theory argued that six sided, perfect hexagons were better equipped to accommodate the bees six feet. The second theory was founded on mathematical arguments that a perfect hexagon yields the greatest amount of space and efficiency. This argument was later described in a paper written by University of Pittsburgh professor Thomas C. Hales. His book, “The Honeycomb Conjecture”, attempts to prove the reasoning mathematically.  Below is Hale’s Therom 2, a mathematical proof on why bees chose the hexagon.

Written in May, 2002, Hale’s paper summarizes: 1. There are solid logical and mathematical reasons why the hexagon is the best shape for storing honey and 2. Honeybees are a helluva lot smarter than us. Nowhere in his paper is there a proof on why honeycomb is so good, however!

If you’d like to dig deeper and get really geeky, you can review Hale’s mathematical paper chase on why bees chose the hexagon. It offers a deeper insight into the engineering marvel behind the hexagon and why the bees chose it. The underlying complexity helps to better appreciate its simplicity and the miracle of honeycomb.

*As honeycomb remains rich in sugars, diabetics should consume with moderation.

Built by Bees offers fresh quality American honeycomb harvested straight from the beehives in the Okefenokee Swamp. This honeycomb is completely unprocessed, 100% edible and hand cut at Built by Bees’ kitchen. This edible honeycomb has a mild, delicious taste, incredible clarity ranging from light – medium in color, and a slow rate of crystallization. Not to mention all the good stuff from the hive: natural enzymes, royal jelly, propolis and bee pollen.

Where Can I Buy Honeycomb?

Any cookies that may not be particularly necessary for the website to function and is used specifically to collect user personal data via analytics, ads, other embedded contents are termed as non-necessary cookies. It is mandatory to procure user consent prior to running these cookies on your website.

Join Waitlist We will inform you when the product arrives in stock. Please leave your valid email address below.

Thank you for subscribing!